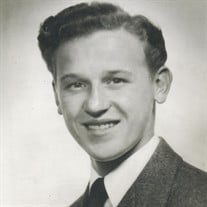 William L. Petrone (“Bill/Pete”) Age 92 of Delmont, PA passed away on Wednesday, November 1, 2017. Bill was born on March 23, 1925 and raised in Wilkinsburg, PA where he attended Wilkinsburg High School. After graduation he joined the Marine Corp where he spent the majority of his enlistment in North Carolina fighting in the nation’s secret war against U-boats off the USA coast. He married Celia Willis from Atlantic, North Carolina and remained in the area fishing the waters of the Core Sound. After his discharge he returned to Wilkins Township, Pittsburgh, PA where they raised four children. Bill spent most of his career working first for the Joseph Graciano Company and later as an electrician for Sargent Electric. Bill is survived by his children Barbara Melson, Lynn Petrone (Barry), William Petrone (Alyssa), and Jennifer Bruce as well as his six grandchildren Rebecca, Jessica, Harrison, Alyssa, Sam, Hannah, and six great grandchildren. He was predeceased by his wife Celia, parents James and Helen Petrone, his brothers Richard and James Petrone, his great granddaughter Gwen Montgomery and son-in-law Rick Melson. Bill loved gardening, cooking, golfing, traveling, dancing, and participating in his class reunions, all of which he continued to do until recently. He was a devout Roman Catholic and was active in the Knights of Columbus. His children are extremely grateful for the 15 years of care that he provided his wife during her struggle with Alzheimer’s disease. The family would like to thank Hempfield Manor, Greensburg, PA for the excellent and kind care which they provided during the final months of his life. Visitations will be held on Friday, November 3rd from 6:00 to 8:00 PM and Saturday, November 4th from 9:00 to 11:00 AM at the GENE H. CORL INC. FUNERAL CHAPEL AND CREMATION SERVICES OF MONROEVILLE, 4335 Northern Pike (412-372-2100). A Blessing service will follow the visitation at 11 a.m. Interment will be private. In lieu of flowers, please send donations to Excela Hospice – Charitable Foundation, Excela Latrobe Hospital, One Mellon Way, Latrobe PA 15650 or to Hempfield Manor, 1118 Woodward Drive, Greensburg, PA 15601. Please visit www.corlfuneralchapel.com

The family of William L. Petrone created this Life Tributes page to make it easy to share your memories.