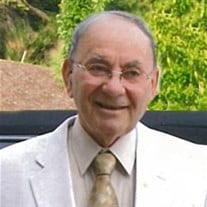 Of Monroeville, on November 23, 2019, at 90 years old, Vincent Ventresca peacefully passed away surrounded by his loving family. Vince was raised in Coraopolis, PA and joined the Navy after graduating from high school. As a talented musician, he was accepted into the Naval Band. Before being stationed in Hawaii he spent a year on the USS Coral Sea and traveled the world. Utilizing the GI bill, Vince went on to graduate from Duquesne University earning his master’s degree in music. It was at Duquesne where he met his devoted, loving wife of 62 years, Mary (Cerra) Ventresca. Vince was the cornerstone of the family and the rock supporting his five children. His quick wit and joking nature was only surpassed by his loving, generous spirit. Besides music, Vince enjoyed gardening and visiting with his friends of Friday evenings. Vince was a strong figure in the Monroeville community as he was a longtime member of St. Bernadette’s Church and the music/band director at Gateway School District. He positively impacted many students in the Monroeville area. Vince took an early retirement from Gateway after 30 years in the district to pursue his passion for music. As a professional musician he played for the Civic Light Opera for more than 30 years, he traveled with Broadway shows, and he played for celebrities that performed at the Holiday House and many venues in Pittsburgh’s Cultural District. He was one of the few lucky people in life whose career was his passion – music. Vince was preceded in death by his parents, Joseph and Teresa Ventresca of Coraopolis, and sister in-law Marilyn Ventresca. He leaves behind his treasured wife Mary (Cerra) Ventresca; his brother Eugene Ventresca; his beloved children, David Ventresca (Jolene), Natalie McElhaney (Chook), Joseph Ventresca (Paul), Joyce Ventresca and Jean Markewinski (Dennis); his grandchildren, Stephen Lyon, Scott Lyon (Bethany), Andrea Castro Cara (Francisco), JJ Mignogna (Alana), Ryan Dormer, Maura Messer, Gary Messer, Jr., Lauren (Akira) Farmer and Griffen McElhaney; his five great grandchildren, Ava, Nico, Smith, Vienna Mignogna and Brodie Lyon; as well as many nieces and nephews who all will miss his friendly face and loving heart. Friends will be received on Tuesday, November 26th from 2-4 and 6-9 p.m. at the GENE H. CORL INC. FUNERAL CHAPEL AND CREMATION SERVICES OF MONROEVILLE, 4335 Northern Pike (412-372-2100). Mass of Christian Burial at 11 a.m. on Wednesday, November 27, 2019 at St. Bernadette Church, Monroeville. Interment following in New St. Joseph Cemetery. In lieu of flowers please make donation to the Military Family Relief Assistance Program (MFRAP)Department of Military and Veterans Affairs, Bldg. 0-47, Fort Indiantown Gap, Annville, PA 17003-5002Phone: (717) 861-6500 or to the Gallagher Foundation (hospice), 1370 Washington Pike, Suite 401B, Bridgeville, PA 15017, who took care of him in his final days.

Of Monroeville, on November 23, 2019, at 90 years old, Vincent Ventresca peacefully passed away surrounded by his loving family. Vince was raised in Coraopolis, PA and joined the Navy after graduating from high school. As a talented musician,... View Obituary & Service Information

The family of Vincent Ventresca created this Life Tributes page to make it easy to share your memories.