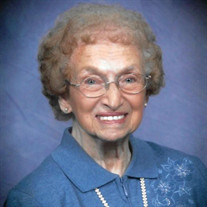 Victoria P. Sekera, 96, of Monroeville, passed into the arms of her loving Lord and Savior on Friday, July 24, 2020. She was born January 5, 1924, in Pitcairn, to the late Ross J. and Mary P. (Fontinella) Perry. She graduated from Pitcairn High School at the age of 16 and entered the workforce at Westinghouse Corporation in East Pittsburgh, serving as a secretary in the W-5 machine shop. While conducting a time-study, she caught the eye of a young machinist named Robert Sekera. After a long and active courtship, which included breaking a leg while skiing on Laurel Mountain and falling through the ice while ice skating at Schenley Park, they married in 1957. Next to her husband, the light of her life was her son, Keith. The second half of her vocational career was spent serving the Gateway School District briefly as a lunch aide and primarily as the Secretary of Personnel. One of her proudest moments while employed in this position was serving as matchmaker for her son and his future wife, Kathy, a district teacher. Victoria was an especially loving and devoted grandmother to her two grandsons, Kurtis and Kristopher. Loving and serving Jesus Christ was her main joy in life, which she actively and boldly shared with others. She practiced this by worshipping throughout her life at Pitcairn Assembly of God, Garden City United Methodist Church, Monroeville Assembly of God, and New Life Presbyterian Church in Harrison City. She was quite content to live the last year of her life at Redstone Highlands in Murrysville, where she was loved and cared for very well. Victoria was preceded in death by her husband, Robert S. Sekera, and her sister, Julia (Perry) Eckle. She is survived by her son, Keith, his wife Kathy, and her grandsons, Kurtis and Kristopher, all of Level Green, and her brother-in-law, Tom (Lou Goad) Eckle, of North Carolina. Private visitation and services are entrusted to Gene H. Corl Funeral Chapel, Inc., of Monroeville.

Victoria P. Sekera, 96, of Monroeville, passed into the arms of her loving Lord and Savior on Friday, July 24, 2020. She was born January 5, 1924, in Pitcairn, to the late Ross J. and Mary P. (Fontinella) Perry. She graduated from Pitcairn... View Obituary & Service Information

The family of Victoria P. Sekera created this Life Tributes page to make it easy to share your memories.

Victoria P. Sekera, 96, of Monroeville, passed into the arms...