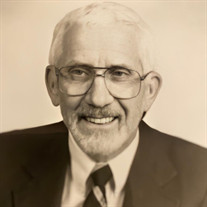 On May 3, 2022, formerly of Monroeville, passed away while surrounded by his family. He was born on November 1, 1925, loving husband of Louise Hennemann, and late wife Patricia Clancy Schuerger; dear father of Kathleen “Kate” Bradford (Gordon), Mark (Debbie), Pegaret Pichler, Matthew (Anne), stepsons William (Michelle) and Edward (Mary); grandfather of nine; step grandfather of four; great-grand-father of nine; brother of Mary Ann Zitello, and the late Richard, James, Jerome, and George; son of the late Richard and Rita Schuerger. Descendant of immigrants from the German village of Metzenseifen and Kleinfischlingen, Germany. Raised and educated in Lakewood, OH. Received Bachelor’s degree in Physics from Case-Western Reserve University and Master’s degree in Mechanical Engineering from Carnegie-Mellon University. His college was started after a stint in the US Army Air Force during WWII. Managed one of the research divisions at US Steel Corp Monroeville, PA. He was a registered professional engineer, issued patents, and published technical papers in the instrumentation and control and systems fields. He retired from US Steel Research and from associate professor at Penn State University McKeesport and was chairman of the university’s technical advisory committee. After retirement he consulted with clients. Member of the Home Rule Charter Commission in the 1970s to develop the charter for Monroeville’s municipal government. Served 24 years as Monroeville councilman and 8 years as mayor. Served as treasurer for the Greater Monroeville Area Chamber of Commerce. Voted Monroeville Man of the Year in 1985. He was a Chamber director, member of the Rotary Club, and lay member of North American Martyrs Church. An avid runner, he qualified twice for the Boston Marathon, loved sailing and raced on the weekends at Lake Arthur, and downhill skied until his mid 80s. He enjoyed his retirement time being a docent at Blackwater Wildlife Refuge and Antietam Battlefield plus hospital visits through St. John the Evangelist in Frederick, MD. Friends will be received on Monday, May 9, 2022, from 10 a.m. until 12 noon at the GENE H. CORL FUNERAL CHAPEL INC. AND CREMATION SERVICES OF MONROEVILLE, 4335 Northern Pike (412-372-2100). Mass of Christian Burial at 12:30 p.m. at Christ the Divine Shepherd Parish at St. Bernadette Church, 245 Azalea Drive, Monroeville. Interment following in Good Shepherd Cemetery. Condolences may be made at www.corlfuneralchapel.com.

On May 3, 2022, formerly of Monroeville, passed away while surrounded by his family. He was born on November 1, 1925, loving husband of Louise Hennemann, and late wife Patricia Clancy Schuerger; dear father of Kathleen &#8220;Kate&#8221; Bradford... View Obituary & Service Information

The family of Thomas R. Schuerger created this Life Tributes page to make it easy to share your memories.

On May 3, 2022, formerly of Monroeville, passed away while surrounded...