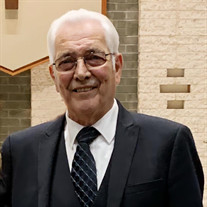 Thomas “Tom” Palmieri, of Monroeville, age 74, passed away on September 29, 2021 surrounded by his family after a courageous battle with cancer. He was the beloved husband of Sandra (Shamlin) Palmieri, for 52 years. Tom was born on October 16, 1946 in Pittsburgh to the late Dominic and Angela (Kaminski) Palmieri. Devoted father of Leslie Ann (Rafael) Gelpi and Brian (Loren) Palmieri; proud “Pap” to Anthony Palmieri, Brandon Gelpi and Chase Gelpi; big brother of Catherine (Charles) Taggart, Roseanne (John) Williams and the late Frank (surviving wife, Ann), Richard (surviving wife, Anne Marie), Marie, and Arthur (surviving wife, Carol); also survived by many nieces, nephews and great-nieces and great-nephews. He was also preceded in death by his nephew Dominic Palmieri. Tom proudly served in the United States Navy and then as a City of Pittsburgh Police Officer for 29 years. He later worked as a Federal Security Officer until his diagnosis in June of 2019. Tom, “Mr. P.” enjoyed his many years coaching youth sports including Pee Wee Football for Greenfield, Morningside, and Gateway (Monroeville) and as a girls basketball coach for St. Rosalia’s in Greenfield for many years. Tom was a Pittsburgh Sports Fan and loved to travel, dance, and spend time with family and friends. He was very proud of his children and grandsons. Friends will be received on Saturday from 6-8 p.m. and Sunday from 1-4 and 6-8 p.m. at the GENE H. CORL FUNERAL CHAPEL INC. AND CREMATION SERVICES OF MONROEVILLE, 4335 Northern Pike (412-372-2100). Mass of Christian Burial at 11 a.m. on Monday, October 4, 2021 at Christ the Divine Shepherd Parish at St. Bernadette Church, 245 Azalea Drive, Monroeville. Interment following in Good Shepherd Cemetery. In lieu of flowers, memorial contributions may be made in Tom’s name to the Wounded Warriors at www.support.woundedwarriorproject.org or St. Jude Children’s Research Hospital at www.stjude.org. Online condolences may be left at www.corlfuneralchapel.com.

Thomas &#8220;Tom&#8221; Palmieri, of Monroeville, age 74, passed away on September 29, 2021 surrounded by his family after a courageous battle with cancer. He was the beloved husband of Sandra (Shamlin) Palmieri, for 52 years. Tom was born... View Obituary & Service Information

The family of Thomas "Tom" Palmieri created this Life Tributes page to make it easy to share your memories.

Thomas “Tom” Palmieri, of Monroeville, age 74, passed away on...