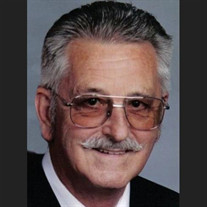 Ronald E. Koerner, of Monroeville, passed away peacefully, Saturday, January 15th. Born February 19th, 1935, in Evans City, PA, to the late Leland and Gladys Koerner. He was the beloved husband of the late Shirley Marie Koerner, to whom he couldn’t wait to be reunited with one day. Ronald was a wonderful father to Rebecca (John) Saglime of Bay City, Texas and Deborah (the late Daniel) Schwaderer of Level Green. His grandchildren meant the world to Ronald, he was Pap to Dr. John Thomas Saglime Jr. PsyD, Kristina Saglime, Madeline Van Dyke and her husband Scott, Roxanne Schwaderer, and Penelope Schwaderer and her husband George Smith III. Ronald was also blessed with five great-granddaughters, whom he loved so much, Lilly, Ava, Danyelle, Layla, and Sadie. He is survived by his brother-in-law and friend, William T. Harter of Monroeville. Ronald was retired from the Monroeville Boro, where he was a foreman of the road crew. He was also a fireman with Monroeville Fire Co. #4 for many years and was also a lifetime member of Crossroads Presbyterian Church, where he was a Deacon for a while. Ronald was a true family man, he loved traveling around the United States with his wife in their motorhome. He also loved square dancing with Shirley, camping, traveling, fishing, and amusement parks, there was not a rollercoaster he wouldn’t ride. Ronald loved spending time with his great-granddaughters and telling them stories of the good old days. He was a friend to everyone he met and had a great sense of humor that will be missed. Friends will be received from 2-4 and 6-8 p.m. on Thursday at the GENE H. CORL FUNERAL CHAPEL INC. AND CREMATION SERVICES OF MONROEVILLE, 4335 Northern Pike (412-372-2100), and where his funeral service will be held on Friday, January 21st at 10:30 a.m. Interment will follow in Plum Creek Cemetery. A wake to celebrate his life will be held Friday evening at 6 pm, at the Level Green Volunteer Fire Department, 536-PA Route 130, Level Green PA, 15085.

Ronald E. Koerner, of Monroeville, passed away peacefully, Saturday, January 15th. Born February 19th, 1935, in Evans City, PA, to the late Leland and Gladys Koerner. He was the beloved husband of the late Shirley Marie Koerner, to whom he couldn&#8217;t... View Obituary & Service Information

The family of Ronald E. Koerner created this Life Tributes page to make it easy to share your memories.