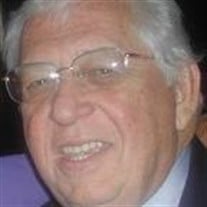 Rolan R. “Rollie” Sims Age 80, of North Huntingdon, formerly of Monroeville and Hazelton, PA., went to meet his Lord and Savior on Monday, December 18, 2017. He was born on April 10, 1937 in Hazelton, PA., son of the late Roland and Dorothy Sims. Music had always played an important part of Rollie’s life and he shared these God-given gifts throughout his life. He played the trombone in the Jazz/Stage/Marching bands at Hazelton High School and sang Baritone in the Boys Barbershop Quartet. After graduation, he directed the Hazelton Mountaineers Barbershop Chorus and sang with several quartets in the chapter of SPEBSQSA. He also sang with the Pittsburgh SPEBSQSA chapter and sang lead with the Tune Peddlers Barbershop Quartet in Pittsburgh, PA. He was the choir director and soloist at Good Shepherd Lutheran Church in Monroeville for eight years, and sang with the Monroeville United Methodist Church (MUM) choir, as well as being a soloist and quartet participant. In addition to his dedication for church music, Rollie sang with the Muses Choral Group in Penn Hills. He also sang with the Mendelssohn Choir (directed by Robert Page) and the Pittsburgh Symphony in a presentation of “Alexander Nevsky”. He was most recently a member of the Community United Methodist Church in Harrison City, PA., where he sang in the choir. In 2008, Rollie spearheaded the efforts of raising significant funds from his 1955 Hazelton High School Classmates for the renovation of the school’s “Castle Auditorium”; in 2012 Hazelton High School was added to the National Register of Historic Places. Rollie worked in the Flexible Packaging industry for many years and was named Salesman of the Year several times. He is survived by his loving wife of 60 years Sandra (Hill) Sims; his children, Janice (Sims) Stancovich and her husband Ken and Susan (Sims) Condrasky and her husband Michael; brother Conrad Sims and his wife Linda (Farley) Sims and his grandchildren, Tracy Sims, Jason Crystol, Justin Stancovich, Jordan Stancovich, Tyler Condrasky and Nicholas Condrasky. He was preceded in death by his sons, David Sims and Robert Sims. Services will be held at the Community United Methodist Church, 3487 Route 130, Penn Township on Thursday, December 21, 2017 at 11 a.m. Memorial visitation will be held prior to the service from 10-11 a.m. In lieu of flowers, memorials may be made to the Community United Methodist Church Building Fund, 3487 Route 130, Irwin, PA. 15642. Arrangements entrusted to the GENE H. CORL INC. FUNERAL CHAPEL AND CREMATION SERVICES OF MONROEVILLE. www.corlfuneralchapel.com

The family of Rolan R. Sims created this Life Tributes page to make it easy to share your memories.