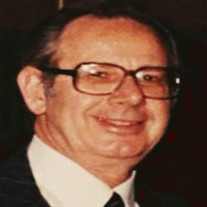 Robert William “Bob” Baudoux Age 90, of Monroeville, passed away on Tuesday, May 23, 2017, surrounded by his loving family. He was born on March 30, 1927 in Portage, son of the late John J. and Isabel (Costello) Baudoux. He was also preceded in death by his brothers Edwin and Homer and is survived by his sister Emily (Charles) Peruso. Bob is survived by his beloved wife of 66 years, Gretchen (Wilkinson) Baudoux; his children, Robert Jr. (fiancé Linda Lakdawala), Renee (John) Hajdukiewicz, Richard and Michael Baudoux; grandchildren, Samuel (Laura) Baudoux, Maura (Thomas) Wilson, Lindsay (Steven) Chiou, Jennifer, Christopher, Anne, and Jerzy Hajdukiewicz, and Colter Baudoux; five great-grandchildren, Aurora Westerman, Kaia and Thomas Wilson, Victoria Baudoux and Katerina Kuskey; and many nieces and nephews. He was also blessed to have many special friends in his life. Bob was a proud US Navy veteran and was stationed at Pearl Harbor, Hawaii during WWII. He graduated from the University of Pittsburgh in 1950 with a B.S. in Chemistry, and was a Research Chemist at US Steel from 1953 to 1985. After retiring, Bob and Gretchen earned their certifications in Exhibition Management. They started RWB Convention Management and served as exhibition managers for the Eastern Analytical Symposium. Bob was a chairman of the Society of Analytical Chemists of Pittsburgh. He spent over 40 years dedicated to the Pittsburgh Conference on Analytical Chemistry and Applied Spectroscopy, for which he served as President in 1982 and headed many committees over the years. He was a Boy Scout leader, little league baseball coach and an avid bowler. He served as Deacon and Elder in his church. Bob, lovingly known as “Pap” to his family, enjoyed the outdoors, loved to fish and had a passion for travel, in particular to the Canadian Rockies. Bob loved family reunions and taking friends and family to Kennywood. Bob was known to have a phenomenal memory. A storyteller, a one of a kind straight shooter, a generous and loyal friend, a man no one will ever forget. Bob was many things in life, but more than anything he was a dedicated family man and man of God. Family and friends will be received Friday from 1-4 and 6-9 p.m. at the GENE H. CORL INC. FUNERAL CHAPEL AND CREMATION SERVICES OF MONROEVILLE, 4335 Northern Pike (412-372-2100). Funeral service will be held at the Grace Reformed PCA, 398 Hochberg Rd., Monroeville at 11 a.m. on Saturday, May 27, 2017, with Pastor Rich Lang officiating. (Everyone please meet at the church). Interment will be private. Donations in Bob’s memory may be made to Grace Reformed PCA. For more information please visit www.corlfuneralchapel.com

The family of Robert William Baudoux created this Life Tributes page to make it easy to share your memories.