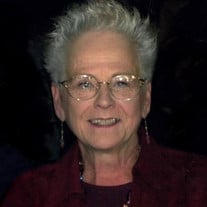 Rhoda Jane (Gehringer) Baldt Age 77, of North Versailles, formerly of Monroeville, passed away on Wednesday, November 13, 2019. Beloved wife of the late Roy A. Baldt; loving mother of Vonita Rae Baldt-Renk and her husband, Robert T. Renk; grandmother of Courtney Lee Kalina and Justin Lee Kalina. She was preceded in death by her father Cyril “Jim” Gehringer, her mother, Helen Vonita Lee, stepfather, Robert E. Lee and brother, James Gehringer and his wife, Maureen, as well as her rescue poodle, Girlsie. In addition, Rhoda leaves behind sister’s-in-law, Lorraine Vallozzi and Christine Baldt-Holby (Merle), and brother’s-in-law, Russell Baldt (Doreen), Michael Baldt, Dale Atkinson (Linda), as well as many nieces and nephews. Born and raised in Western Pennsylvania, following high school, Rhoda (known to many as Dodie) married her lifelong love, Roy, who was drafted by the Army but enlisted in the Navy. Over the years, they shared many good times with family and close friends. They were avid motorcyclists and eventually, Rhoda began riding her own bike and enjoyed many eventful trips. Rhoda was also a Pittsburgh Steelers’ fan and for many years they had season tickets at Three Rivers Stadium. Rhoda also loved taking pictures; lucky for us, because she memorialized her life and ours. While most of her life she worked at various establishments in the area as a waitress or bartender, she also had a cosmetology degree which saved quite a few family members and friends a good bit of money over the years! She spent the last part of career as the manager of the American Legion’s Gold Star Post #820. Rhoda touched many lives over the years. She was a loyal friend and a wonderful mother and grandmother. She was, as many have said, a spitfire and will be truly missed. Hers was a life well-lived.Friends will be received Sunday, November 17, from 2-6 p.m. at the GENE H. CORL INC. FUNERAL CHAPEL AND CREMATION SERVICES OF MONROEVILLE, 4335 Northern Pike (412-372-2100), and where a funeral service will be held on Monday, November 18, 2019 at 11 a.m. In lieu of flowers, memorial donations may be made to the Vietnam Veterans of America at www.vva.org. Please visit www.corlfuneralchapel.com

The family of Rhoda Jane Baldt created this Life Tributes page to make it easy to share your memories.