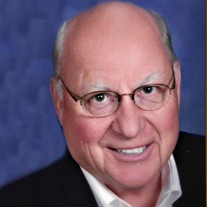 Dr. Raymond Edward Owen, 83, of Pittsburgh, PA., passed away on January 21, 2022. He is survived by his beloved wife of 59 years, Dorothy Fitzhugh Jones Owen, his three adoring daughters, Elizabeth (Harry) Bratt, Deborah (Jeffrey) Bauman, and Laura Durham, and his six loving grandchildren, Rachel Bratt, Matthias Bauman, Owen Bratt, Eliana Durham, Dylan Bauman, and Leila Durham; and his two sisters, Jane Knecht and Joan Owen. Ray was born on July 2, 1938, in McGraw, New York. He graduated from McGraw Central High School in 1957. He studied history at State University of New York (SUNY) Oneonta, then continued on to SUNY Buffalo to complete a Ph.D. in Political Science in 1971. Ray met his future wife while working in Cooperstown. Dottie Jones was on affiliation at Bassett Hospital as a student nurse. The couple married in Freeport, New York on Long Island on May 5, 1962. The couple had three daughters. In 1969, Ray accepted a position on the faculty of the Political Science Department at the University of Pittsburgh, where he spent the entirety of his professional career. At the time of his retirement in 2006, he had held several important positions, including Director of the Urban Studies Program in the College of Arts & Sciences from 1985 – 1995, Vice Chair of the Department of Political Science from 1991 – 1996, and finally Chair of the Department of Political Science from 1996 – 2001. Ray spent 1976-77 teaching at the University Of Glasgow, Scotland, on a Pitt exchange program. The family enjoyed exploring the United Kingdom during the year, including the famous St. Andrews golf course, an important historical site for an avid golfer like Ray. Ray and Dottie enjoyed traveling and often frequented the beaches of Long Island, Delaware and Florida. They traveled across Europe and Ray enjoyed capturing the sights in his photography. Before the pandemic, they made regular trips to Mountain View, California to visit their eldest daughter and her family. The couple had the remarkable experience to sail around the world with Pitt’s Semester at Sea program, not once but twice. During the first voyage in 2004, Ray served as Academic Dean, and during the second trip, he served as a Professor of Political Science. He taught on board the vessel while traveling from port-to-port. On their global voyage, they met with several notable people including Fidel Castro and Bishop Desmond Tutu. A long-time member of the Church of the Redeemer, Ray also served God and the Church as a member of the Vestry, as Senior Warden, and on the Search Committee, who were tasked to find a new priest best suited to lead the Church. Services will be held on Saturday, February 5th at Church of the Redeemer, 5700 Forbes Avenue in Squirrel Hill, at 11:00 a.m. Zoom link is available by emailing: [email protected] In lieu of flowers, memorial donations may be made to Church of the Redeemer, 5700 Forbes Avenue, Pittsburgh, PA 15217 or Leukemia & Lymphoma Society (givenow.lls.org). Arrangements entrusted to the GENE H. CORL FUNERAL CHAPEL INC. AND CREMATION SERVICES OF MONROEVILLE. Condolences to the family can be made at www.corlfuneralchapel.com

The family of Raymond E Owen created this Life Tributes page to make it easy to share your memories.