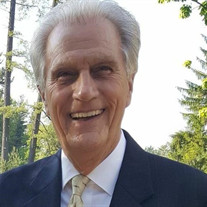 Raymond G. Gallagher “Scientist, Inventor and Volunteer remembered for his intellect and humor” Age 79, of Plum Borough, on Friday, January 19, 2018, after a brief illness. Ray was the son of the late Charles A. and Nettie (Treml) Gallagher and was the middle child of eleven children. Beloved husband of Patricia (Rehak) Gallagher for 55 years, and loving father of Jeff Gallagher (Lorine) of Plum Borough and Renee (Gallagher) Pediconi (Gabe) of Murrysville. He was proud of his six grandchildren, Jeffrey Gallagher, Sydney Sabo, Josh Sabo, Noah Sabo, Gabriella Pediconi and Jason Berkovich. He was brother of Martha Brusco (Dom), Helen Amatucci (Frank), Carol Edwards (Charles), Linda Gallagher, Buzzy Gallagher and the late Betty Arbster (Frank), Jennie Demengo (Ed), Stan and Jerry Gallagher. As can be expected, Ray had many nephews, nieces and cousins. Born in the Turtle Creek area of Pittsburgh, Ray was a subtle humble and unassuming person and of strong faith. He attended St. Colman’s elementary school in Turtle Creek and Scott High School in North Braddock. After high school, Ray attended Juniata College and graduated with a B.S. degree in Physics. He went to graduate school at UCLA and received a M.S. degree in Mechanical Engineering/Material Science. Ray continued his education with graduate GSIA study at CMU. He was very thankful to PPG for sponsoring his graduate education. Also, Ray went on to graduate from the Executive Program in Marketing at Columbia University in New York. Coming from a large family, Ray recognized the importance and need for education and hard work. After graduating from college, he became a full time PPG employee in the Window Engineering Group at the PPG Glass Laboratory, and he continued working at PPG for the next 45 years in a variety of upward positions. This included positions in Glass Research, G.O. Marketing and Product Development. Along the way, Ray was awarded several U.S. patents, and international patents in Germany, Italy, Sweden and India. At PPG, Ray was recognized as a superb scientist, and he made many contributions in heat transfer technology involving windows and buildings. For many years, Ray managed the Commercial Glazing Group of engineers and scientists at the Glass Research Laboratory. Ray was awarded the highest PPG technology award twice as the recipient of the “Presidents Award for Technical Excellence” for the development and commercialization of the profitable and industry changing PPG INTERCEPT SPACER- a low energy transfer product for windows. Also, Ray played an important role in customer relations when signing up over 300 licensees for this technology. In addition, Ray participated in several window trade organizations, and he served on the Board of Directors for NFRC, SIGMA, EHHA, IGMA, PASC AND IGMAC. With regard to other interests, Ray was an excellent golfer and tennis player, and immensely enjoyed playing table tennis with his grandchildren. There were many laughs and good times in these games. During 55 years of golfing, he managed to get two holes-in-one. Ray was an active member of the local Plum YMCA, Our Lady of Joy Parish, and a member of the Masonic Lodge # 502, Tarentum, PA. for over 50 years. After retirement from PPG in 2004, Ray started his own company as Gallagher Technical Services LLC. His clients included PPG, various attorneys and companies in the United States, Europe, Mexico and Canada. He ran this LLC for several years and officially retired in 2014. Interesting, Ray served as an “expert witness” on several significant Federal Court cases related to windows and building construction. Everyone who knew Ray will miss him dearly. Friends will be received Wednesday from 2-4 and 6-8 p.m. at the GENE H. CORL INC. FUNERAL CHAPEL AND CREMATION SERVICES OF MONROEVILLE, 4335 Northern Pike (412-372-2100). Mass of Christian Burial at 10 a.m. on Thursday, January 25, 2018 at Our Lady of Joy Roman Catholic Church, 2000 O’ Block Rd. in Plum. (Everyone please meet at the Church). Interment will be private. In lieu of flowers, please donate to Shriners Hospitals for Children, Office of Development, 2900 Rocky Point Dr., Tampa, FL 33607 or St. Jude Children's Research Hospital, P.O. Box 1000, Dept. 142 Memphis, TN. 38148-0142. Please visit www.corlfuneralchapel.com

Raymond G. Gallagher &#8220;Scientist, Inventor and Volunteer remembered for his intellect and humor&#8221; Age 79, of Plum Borough, on Friday, January 19, 2018, after a brief illness. Ray was the son of the late Charles A. and Nettie (Treml)... View Obituary & Service Information

The family of Raymond G. Gallagher created this Life Tributes page to make it easy to share your memories.