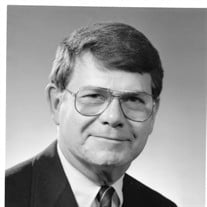 Age 91, of Monroeville, died peacefully in the early morning of September 8 after a life well lived. Phil was born in Pitcairn, PA to the late Philip Mosheim Lichtenfels and Geraldine (Schoff) Lichtenfels. His loving older sister, Betty, helped to look after him in his early years. After graduating from Pitcairn HS in 1948, he attended Bucknell University where he quickly met the love of his life, Janice Schoener; they were married for nearly 70 years. Phil graduated in 1952 with a degree in economics and minor in secondary education. He was a member of the only undefeated football team in Bucknell’s history. He then graduated from Army Officer Candidate School and served as a Company Commander with the 101st Airborne at Ft. Jackson, SC. He was honorably discharged and later certified as a Disabled American Veteran. Phil’s long and distinguished civilian career began in 1955 when he joined the Westinghouse Electric Company as an Office Methods Analyst. He eventually rose to become the company’s first Chief Information Officer (CIO). He then served about ten years as the CIO at Heinz Corporation. Phil never wanted to retire and worked parttime on consulting projects right up until April of this year. He received many honors and awards throughout his career and in 2016 was named CIO of the Year by the Western Pennsylvania Technology Council. He was very dedicated to the information technology profession and served on numerous voluntary advisory boards, including for Duquesne University and the PA Governor’s CIO Council. He was a dedicated mentor to innumerable IT professionals over the years, and they remain his friends to this day. When he wasn’t working or serving others (which was most of the time!), he pursued a wide range of hobbies and interests such as gardening, building furniture, military history, model trains and airplanes, to name a few. Phil is survived by his loving wife, Janice; children, Philip Arthur (Debbie), Carol Ann Dunn, William John, and James Edward; grandchildren, James Philip Dunn (Jillian), Rylie Dunn Spencer (Mark), and Philip David Lichtenfels; numerous great-grandchildren; nephews, Al Felgar and Lee Felgar (Lescha), niece Amy Felgar, and their families. Phil was a loving and hardworking man, loyal to friends and family. He will be sorely missed by all of us. Rest in your well-earned eternal peace. Phil’s memorial service will be private. Arrangements entrusted to the GENE H. CORL FUNERAL CHAPEL INC. AND CREMATION SERVICES OF MONROEVILLE. Notes of condolence may be sent to the family via Corl Funeral Chapel, www.corlfuneralchapel.com.

The family of Philip J. Lichtenfels created this Life Tributes page to make it easy to share your memories.

Age 91, of Monroeville, died peacefully in the early morning...