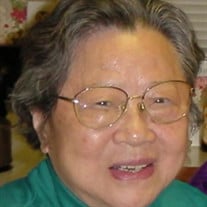 Ming Chu Hu Wong Age 100, of Monroeville, passed away on Friday, October 28, 2016. Mrs. Ming Chu Hu Wong was born in Wuhu, An-Hwei, China on September 11 (October 14 in Chinese calendar), 1916. She was the first child of the 5 children of Hsun and Liu Yi Chin Hu. On October 16, 1935 she married Mr. Pey Long Wong of Wan-Zhi, An-Hwei. During World War II, the family moved from An-Hwei to Szechwan where she graduated from a professional program of the Department of Szechuan Provincial Government and became a certified accountant. After the war Mrs. Wong was transferred to a government operated Gold Mine facility in Northern Taiwan while Mr. Wong was transferred to the Lo-Tung Paper Mills in Lo-Tung, Taiwan. Six months later Mrs. Wong and the children moved back to the mainland, but then in 1948, as communists took over China, the family reunited in Taiwan. In mid-1960s Mrs. Wong followed Mr. Wong to Manila, Philippines where they lived till his retirement in 1987. They then moved to Pittsburgh to live close to two of their children. Mrs. Wong liked gardening and cooking. She always enjoyed in prepare Chinese food for the family gatherings and for relative and friends’ visits. She leaves to mourn her passing daughter Ai-Chi Liu, son Bi-Cheng Wang and wife Johnna, daughter Ai-Ping Ma and husband William; grandchildren Jenny Ying and husband Shun, Jimmy Liu and wife Diana, Sam Liu and wife Irene, Tony Wang and wife Melissa. Andrew Wang and wife Joyce; William A Ma, Alexander Ma and wife Heather; great grandchildren Vincent Ying, Justin Ying, Stephen Liu, Veronica Liu and Brandon Liu, Matthew Wang, Brianna Wang, and Lucas Wang. She was a kind and loving person, and touched the lives of many who knew her. She will be sadly missed. She was preceded in death by her husband Pey Long. Friends will be received Friday from 6-8 p.m. and Saturday 9:30 -10:30 a.m. at the GENE H. CORL INC. FUNERAL CHAPEL AND CREMATION SERVICES OF MONROEVILLE, 4335 Northern Pike (412-372-2100) and where a funeral service will be held at 10:30 a.m. on Saturday, November 5, 2016, with Pastor Paul Trinh officiating. Interment following in Plum Creek Cemetery. Donations in Mrs. Wong’s memory may be made to any charity. The family of Mrs. Wong wishes to thank their friends for their help and kindness during their recent bereavement. Online memories may be expressed at www.corlfuneralchapel.com/obituaries/Ming-Wong

The family of Ming Chu Hu Wong created this Life Tributes page to make it easy to share your memories.