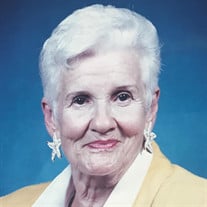 Margaret (Peg) Osterholm Belajac age 96 of Monroeville,PA went to her heavenly home on June 24th . Beloved wife of the late John P. Belajac. She was the dear mother of Karen Kelly of Monroeville, Kathi McGrath (Paul) of McMurray, Kristi Tunder ( late Michael) of Penn Hills and Jo Ann Buskey (late Robert) of Saltsburg. She is survived by 12 grandchildren and 20 great grandchildren. Predeceased by grandsons John A. Dzuriak and Brian McGrath. Peg’s career covered a span of forty years. Her first work experience came while she was a student at the University of Pittsburgh. After graduation in 1944 she continued with the Brashear Association full time and also served as an assistant in the Senior Nursery School at the Falk School in Oakland. In 1947 her first job as a teacher was with the Irene Kaufmann Settlement Nursery School in the Hill District. She worked there for seven years and later became the Director of the Y.M. and W.H.A. Irene Kaufmann’s Center’s Preschool and Day Camp Program in Squirrel Hill for another seven years. She was hired in 1966 as an Assistant Coordinator in the Board of Education’s Head Start Program and later became the Director of the Program. In 1976 she entered the Pittsburgh Board’s Kindergarten Program teaching in Colfax and Horace Mann schools. John Morrow school was one of six schools selected to pilot the full day Kindergarten program in 1979. Peg was chosen over a number of candidates vying for this position. She remained in that capacity for six years at John Morrow School until retirement in 1985. After retirement John and Peg spent their winter months in the St. Petersburg KOA in Florida which they dearly loved. Friends will be received Thursday June 27, 2019 from 1-4 & 5-8 p.m. at the GENE H. CORL INC. FUNERAL CHAPEL AND CREMATION SERVICES OF MONROEVILLE, 4335 Northern Pike. A Funeral Service will be held at 11 a.m. on Friday, June 28, 2019 at the Hope Lutheran Church, Forest Hills. (Everyone please meet at Church). Interment following in Cross Roads Cemetery. A special thank you to Sharon Leviege R.N. from Heartland Hospice who always gave my mother hope, and Dr. Muthappan for his dedication, healing, and caring for the elderly. In lieu of flowers, please make memorial contributions to Hope Lutheran Church 353 Ridge Ave., Forest Hills, PA 15221. Please visit www.corlfuneralchapel.com

The family of Margaret (Peg) Osterholm Belajac created this Life Tributes page to make it easy to share your memories.