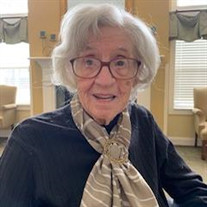 Louise Condon, age 91, died peacefully July 12, 2020 at her residence at Brookdale of Murrysville. Louise was born on April 29, 1929, the seventh of nine children of Mark and Mary Papa and she grew up in the East Liberty area of Pittsburgh and graduated from Peabody High School in 1946. She married John F. Condon, Jr., on May 29, 1954. John and Louise moved to York, Pa where they raised their three children, Michael, Matthew and Mary Ann. Louise was very active in her church, St. Patrick Catholic Church in York, with the CCD program, Eucharist Ministry and with the National Council of Catholic Women both at a parish and diocesan level. She was the President of the Harrisburg Diocesan Council of Catholic Women from 1996-1998. Family was very important to her. She enjoyed family reunions and traveling with her sisters and their families. She acted as family historian and picture taker. She kept an updated list of everyone’s birthdays and contact information fondly called the Papa Family List. She loved to play bridge and go to the casinos, particularly with her sister, Barbara. Unfortunately, neither sister ever hit it big, but they had fun. She attended every milestone event of her beloved granddaughter, Cori and never missed a concert of her grandson, Daniel. She was a proficient seamstress and gardener—She kept one photo album consisting solely of pictures of her gardens over the years. She was an avid Pittsburgh Pirate fan all her life. She loved to tell the story of listening to the Pirates 1960 World Series on the radio. When Mazeroski hit his walk off home run to win the series, she ran out in the yard screaming for joy much to the confusion of her new neighbors in York who were not Pirate fans. In her later years, she also worked as an administrative assistant for several local companies. After the death of her husband, John, in 2003, she relocated back to Pittsburgh, settling in Murrysville to be close to her daughter, Mary Ann and her then surviving sisters, Marie, Dorothy and Barbara. She was a member of Mother of Sorrows Parish, Murrysville and active with the Murrysville Seniors Bridge club. She was the last surviving sibling in her family, with her three brothers, Mark Papa, Thomas Papa, and Robert Papa and five sisters, Marie Frankovich, Dorothy Buskey, Mildred Schultz Stanko, Charlotte Bitner and Barbara Hall, all preceding her in death. Her beloved husband, John also preceded her in death. She is survived by her three children, Michael Condon, Matthew Condon and Mary Ann (Mark) Lawrence and three grandchildren, Cori Michelle Condon, Daniel Lawrence and Rachel Condon, and numerous nieces and nephews. Friends will be received on Thursday from 6-8 p.m. at the GENE H. CORL FUNERAL CHAPEL INC. AND CREMATION SERVICES OF MONROEVILLE, 4335 Northern Pike (412-372-2100). CDC Guildlines will be followed and masks will be required. Mass of Christian Burial on Friday, July 17, 2020 at Mother of Sorrows Parish, Murrysville at 10 a.m. Interment following in Calvary Cemetery. www.corlfuneralchapel.com.

Louise Condon, age 91, died peacefully July 12, 2020 at her residence at Brookdale of Murrysville. Louise was born on April 29, 1929, the seventh of nine children of Mark and Mary Papa and she grew up in the East Liberty area of Pittsburgh... View Obituary & Service Information

The family of Louise Condon created this Life Tributes page to make it easy to share your memories.