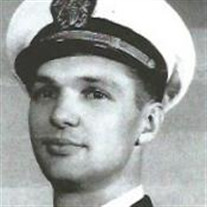 Leslie John Kuzenski Age 90, formerly of Monroeville, passed peacefully on Saturday, June 11, 2016 at William Penn Personal Care in Jeannette, PA. He was born on January 11, 1926, in Catasauqua, PA, son of the late John J. Kuzenski and the late Ilona S. (Tindula) Kuzenski. He and his wife Betty were married on May 1, 1948, and recently celebrated their 68th anniversary. He is survived by his beloved wife Elizabeth “Betty” Kuzenski; his daughters Leslie (Douglas) McKinney of Pittsburgh, Lisa (Robert) Elms of Monroeville, and Julie (Edward) Kral of Delmont, PA. He is also survived by his grandchildren, Nicole (Jason) Dickey, Marina Elms, and Rebecca Elms, and his great-grandson, Connor Dickey. He is also survived by his brother Kenneth (the late Sally) Kuzenski of Florida, and his sisters Ruth (the late Chester) Szemborski of Georgia and Nancy (Herbert) Purdy of Washington. He was preceded in death by his grandson John A. Kudravy Jr. and his sister Marjorie (the late Harvey) Smale. Leslie was an accomplished accordionist who performed for many audiences as a young man growing up in eastern Pennsylvania on his family’s farm. He was also an outstanding academic graduate of Catasauqua High School in PA., which led him to be awarded placement as a V-12 cadet at Stevens Institute of Technology in Hoboken, NJ in 1947. He became a commissioned officer with the US Navy upon graduation from Stevens Tech with a degree in mechanical engineering. He retired from the Navy in 1966 as a Lieutenant Commander. Leslie’s career as a mechanical engineer began with Ingersoll Rand. He then moved his family to Monroeville, PA, in 1954 where he was a Professional Engineer with the Westinghouse Corporation in Cheswick, PA, in the Electro-Mechanical Division until his retirement in 1986. Leslie was a longtime member of Cross Roads Presbyterian Church in Monroeville, PA., and was involved with many of the church’s activities, including election to the Board of Elders. He was an avid bicyclist for most of his life, and a lifelong learner, especially pertaining to science and history. He also enjoyed an avocation as an inventor, using his engineering knowledge to problem-solve home projects. The family wishes to thank the staff at William Penn Senior Suites Assisted Living and the staff at William Penn Person Care Skilled Nursing Center in Jeannette, PA., for their kind and compassionate care of our husband and father during his residence there. Friends will be received from 2-4 & 6-8 p.m. Monday, June 13, 2016 at the GENE H. CORL INC. FUNERAL CHAPEL AND CREMATION SERVICES OF MONROEVILLE, 4335 Northern Pike (412-372-2100). Additional visitation from 10- 11 a.m. on Tuesday, June 14, 2016, with the funeral service following at 11 a.m. in the funeral chapel, with Rev. Robert J. Marrow officiating. Interment will be private. In lieu of flowers, the family suggests memorial contributions to Cross Roads Presbyterian Church, 2310 Haymaker Rd., Monroeville, PA. 15146. For more information, please visit www.corlfuneralchapel.com

The family of Leslie John Kuzenski created this Life Tributes page to make it easy to share your memories.