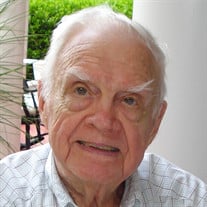 John Mackenzie Spear Age 95, of Monroeville, died peacefully at home surrounded by his loving family on Friday, September 2, 2016. Born December 30, 1920, in Erie, PA, John was a WW II veteran, a pilot of the B-17G Flying Fortress serving in the Army Air Corps flying missions in the European Theater. John captured these years in his memoir “WW-II Europe - May 1944 to April 1945 - My Story” written in 2006, sharing this story with family and friends, and also speaking to school groups on Veteran’s Day in recent years. Returning from military service, John attended Case Institute of Technology earning his B.S. in Mechanical Engineering, and later his M.S. in Mechanical Engineering from the University of Pittsburgh. Moving to Pittsburgh, he began his engineering career at General Motors Fisher Body, but he soon found his life’s work professional home at Westinghouse Bettis Atomic Power Laboratory in West Mifflin. This work included serving for the Department of Energy at the Idaho National Engineering Laboratory from 1977-1982, then returning to Bettis and retiring in 1991 after 35 years of service. His contributions and expertise in engineering contributed significantly to the design of the core cage assembly of the USSN Skate Nuclear Reactor. Bettis was a leader in creating the nuclear navy. Above all, John loved and adored his wife, Vera, and was devoted to his family. He is survived by his beloved wife, Vera (Zurbrugg) Spear; and his children, Pamela Spear Price (Robert) of Monroeville, Theodore Jon Spear (Kim) of White Oak, and Jennifer Spear Harp (Steve) of State College; his grandchildren Jeffrey Price (Tracey), Matthew Harp, and Erica Mackenzie Harp and great-grandchildren Ashley Price, Delaney Price, and Addison Price, sister-in-law Margery Spear, and many nieces and nephews quite dear to him. He was preceded in death by his granddaughter, Amanda Jane Price, his brother, Barton W Spear, Jr. and parents, Barton W, Sr. and Mildred (Smith) Spear. John will be remembered as an enthusiastic lover of life and people, an ethical problem-solver, a Bronze Life Master Bridge player and teacher, an avid reader, and a film and music buff. Most of all, he enjoyed big band music, dancing with Vera, Pitt Basketball and watching classic films from the golden era. He was an elder in the Presbyterian Church, a member of Crossroads Presbyterian Church, a Mason, and a member of Sigma Nu Fraternity. A memorial service will be held at 11am on Saturday, September 24, 2016 at Cross Roads Presbyterian Church, 2310 Haymaker Rd, Monroeville, PA. Memorial contributions can be made to the Amanda Jane Price Scholarship or the charity of your choice.

The family of John Mackenzie Spear created this Life Tributes page to make it easy to share your memories.