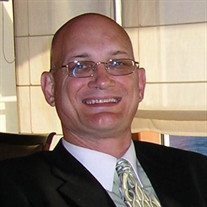 John R. Heinecke, 64, of Level Green, Penn Township, went into the arms of his Lord on November 29, 2021, after a year-long battle with pancreatic cancer. John was born February 25, 1957 in Bay Shore, New York, the second son of Robert Terryn Heinecke and (Myrtle) June Lawyer. John was named after his maternal great grandfather John Haff, and his father Robert. John was an extremely active, inquisitive child, always getting into mischief. His musical talent was evident from an early age. His father took the boys to see computers at age 5 and, from that time on, John was fascinated by them. The love of music and computers followed him his entire lifetime. John grew up in the small hamlet of Great River on Long Island’s south shore. His family spent a lot of time on their boat in the Great South Bay. John played both violin and piano and was the concertmaster for his high school orchestra. John graduated from East Islip High School in 1975 and got his Associates Degree in Computer Science from Suffolk Community College. From there, John attended Rochester Institute of Technology in Rochester, NY. It was there that John met the love of his life, Carol Ann Crawford. After graduating from RIT in 1983, they were married a few weeks later. John worked in the software area for most of his career, including traveling the world as a software instructor for IBM. More recently he worked on real estate development. He was an accomplished keyboard player, singer, and music arranger who used his God-given abilities in worship of our Lord Jesus Christ. He played and sang at a number of churches through the years. His voice and keyboard skills along with his enthusiasm were an inspiration to many. He loved to attend Bible studies to learn about God. He had a servant’s heart and was known to help others in need. He will also be remembered for his fun sense of humor. He loved new adventures like skydiving, spelunking, and white-water rafting. John was preceded in death by his father, Robert Heinecke. He is survived by his mother June; his beloved wife of 38 years, Carol; and his three brothers Glenn, Gary, and Richard. He was a beloved father to Crista Bush (Jonathan) and James Heinecke. “Papa John” was the grandfather of two grandchildren: Malachi and Jude Bush, and the uncle of many nieces and nephews. John always wanted people to know and love his Savior Jesus Christ. He will continue to be loved and dearly missed by his family and many friends. Friends and family are welcome on December 4 from 5 to 8 PM and December 5 from 2 to 4 PM and 6 to 8 PM at the GENE H. CORL FUNERAL CHAPEL INC. AND CREMATION SERVICES OF MONROEVILLE, 4335 Northern Pike. Funeral services will be held at 6:30 PM on December 6, at Grace Baptist Church, 4518 Northern Pike, Monroeville, PA 15146. (Everyone please meet at the church). In lieu of flowers, the family asks that donations (not tax deductible) be made in memory of John Heinecke to: Hope4Cancer, LTD 2514 Jamacha Rd. #502-153 El Cajon, California 92019

John R. Heinecke, 64, of Level Green, Penn Township, went into the arms of his Lord on November 29, 2021, after a year-long battle with pancreatic cancer. John was born February 25, 1957 in Bay Shore, New York, the second son of Robert Terryn... View Obituary & Service Information

The family of John R Heinecke created this Life Tributes page to make it easy to share your memories.