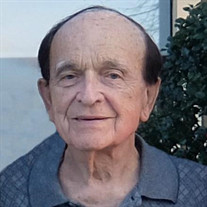 John D. Ferchak Jr. of Monroeville, on January, 31, 2020 at the age of 92. He was the son of the late John D., Sr. and Anna P (Kopas) Ferchak. He is survived by his three children, John D. III (Tamirose) of Florida, Karen Adcox (Joe) of Texas and David (Corinne), also of Texas. He is also survived by his brother, Edward and cousin, John (Victoria), all from Pittsburgh. He had four grandchildren, James, Mary, Christopher and Tracy. He was a lifelong resident of the Pittsburgh area and a devoted fan of the Steelers, Pirates and Penguins. He was a graduate of Munhall High School and later attended Pitt. He proudly served his country as a member of US Army Air Corps in WWII and then spent time in the USAF Reserves. He had a lengthy and successful career as an Engineer in the Westinghouse Nuclear Energy Division until he retired in 1986. In his retirement, he continued to be involved in his church, St. Bernadette, serving as an usher for more than 40 years, up to his passing. He continued his association with Westinghouse as an active member of the Westinghouse Electric Corporation Fellowship Assn. as well as Westinghouse SURE. For years, he enjoyed his membership in the International Association of Jim Beam Bottle and Specialty Clubs where he traveled extensively to attend conventions. He also had a passion for Native American Culture and spent many weekends participating at local Pow-Wows through the Council of Three Rivers American Indian Center. His friendship and involvement led him to being adopted by a tribe, made an Honorary Elder and was passed an Eagle Feather, a very high honor. He also enjoyed the time that he spent with his friends at the Penn Hills Senior Center where he participated in aerobics and many other activities. He will be greatly missed and well remembered by all that knew him. Friends will be received Friday, February 14, 2020 from 2-4 and 6-8 p.m. at the GENE H. CORL INC. FUNERAL CHAPEL AND CREMATION SERVICES OF MONROEVILLE, 4335 Northern Pike (412-372-2100). Mass of Christian Burial at 10 a.m. on Saturday, February 15, 2020 at Christ the Divine Shepherd Parish at St. Bernadette Catholic Church, 245 Azalea Dr., Monroeville.

John D. Ferchak Jr. of Monroeville, on January, 31, 2020 at the age of 92. He was the son of the late John D., Sr. and Anna P (Kopas) Ferchak. He is survived by his three children, John D. III (Tamirose) of Florida, Karen Adcox (Joe) of Texas... View Obituary & Service Information

The family of John D. Ferchak Jr. created this Life Tributes page to make it easy to share your memories.