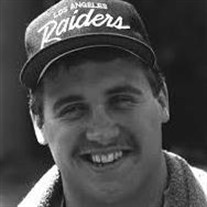 John Robert “Buck” Buczkowski God took Bucky peacefully on May 23, 2018 after a long illness and 54 years of happiness and fulfillment. Buck’s devotion to family and friends was legendary. His sense of humor, humility, charisma, and generosity of spirit made him universally loved. He was a tour de force whose absence will leave a void in so many lives. Buck was as large in kindness as he was in stature at 6’7 and 300 pounds. Buck was recognized as a unique athletic talent: he was a big man with a rare combination of speed strength, and agility. Despite no training or practice in the shot-put, he effortlessly won 2 WPIAL, 2PIAA, and 1 Big East shot-putting championships. Buck played football at Gateway High School where he made All-American and was selected to the Gateway Hall of Fame. He played defensive line for the University of Pittsburgh before being selected as a first round draft pick of the Oakland Raiders in 1986. He also played for the Phoenix Cardinals and Cleveland Browns before injuries cut short his career. Buck was inducted into the Pennsylvania Sports Hall of Fame, Western Chapter. He is survived by his beloved son Brayden; his parents, Dianne and Robert; brother Jeff; sister Pam Kotvas and her husband Charles; goddaughter and niece Amanda; nephew Chuck; Brayden’s mother, Rebecca; and Brayden’s maternal grandparents, Leo Eger and Nancy Eubing. Friends will be received from 2-4 p.m. and 7-9 p.m. on Thursday, May 31 and Friday, June 1 at the GENE H. CORL INC. FUNERAL CHAPEL AND CREMATION SERVICES OF MONROEVILLE, 4335 Northern Pike (412-372-2100). Mass of Christian Burial at 10 a.m. on Saturday, June 2, 2018 at North American Martyrs Church. Entombment following at Penn Lincoln Memorial Park in North Huntington. A gathering for family and friends will follow internment at site to be announced. In lieu of flowers or any 3rd party charities, donations are in exigency for his son Brayden Buczkowski, c/o 4515 Northern Pike, Monroeville, PA. 15146 or can be received at gofundme.com under Buczkowski Funeral and Family Support.

John Robert &#8220;Buck&#8221; Buczkowski God took Bucky peacefully on May 23, 2018 after a long illness and 54 years of happiness and fulfillment. Buck&#8217;s devotion to family and friends was legendary. His sense of humor, humility, charisma,... View Obituary & Service Information

The family of John Robert Buczkowski created this Life Tributes page to make it easy to share your memories.

God took Bucky peacefully on May...