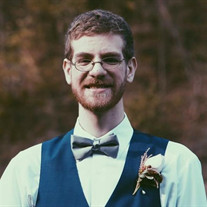 Jeffrey Keith Heberling Age 22, of Monroeville, passed away unexpectedly on Friday, December 29, 2017. Beloved son of Clayton Heberling II and Kathleen Fox; brother of David Heberling, Stephanie Cook (Forrest) and Bethany Heberling; also survived by his girlfriend, Brittany Hadden, and numerous aunts, uncles and cousins. He was preceded in death by his grandparents, S. Keith Fox (from who he was named in honor of), Cora Lee Fox, Earl Heberling and Grace Rothermel. Jeffrey graduated from Gateway Sr. High School where he was a member of the Robotics team. He attended St. Vincent College in Latrobe, graduating in May 2017 cum laude with a BA in History. While there he was inducted into 2 honors societies, Alpha Lambda Delta and Phi Alpha Theta, the National Honors Fraternity. Jeffrey had been an active member of Pack 184 and Troop 184 and had attended Philmont and the National Boy Scout Jamboree. He had a passion for playing Magic cards, having played in many tournaments, and was also a writer. His dry wit and ready smile will be missed by all. Friends will be received Thursday from 6-9 p.m. and Friday from 2-4 and 6-9 p.m. at the GENE H. CORL INC. FUNERAL CHAPEL AND CREMATION SERVICES OF MONROEVILLE, 4335 Northern Pike (412-372-2100). Funeral service 10:30 a.m. on Saturday, January 6, 2018 at Cross Roads Presbyterian Church, 2310 Haymaker Rd., Monroeville. (Everyone please meet at the church). Interment will be private. In lieu of flowers, contributions can be made to the Cross Roads Presbyterian Church or to Gateway Robotics c/o Gateway High School, 3000 Gateway Campus Blvd. Monroeville, PA. 15146. www.corlfuneralchapel.com

The family of Jeffrey Keith Heberling created this Life Tributes page to make it easy to share your memories.