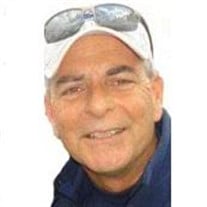 Jeﬀrey Lynn Covol, of Plum Borough, passed away peacefully on October 31st, 2019 at the young age of 60, following a courageous battle with cancer. He was surrounded by many loved ones. Jeﬀ was born on January 21, 1959, and was raised in Monroeville, the son of the late Robert and Jacqueline (Riddle) Covol. He is survived by his son Ryan, Ryan’s mother Amy, granddaughter Reyna, his soulmate Holley Ashbaugh, and treasured dog “OG”. Jeﬀ is further survived by many aunts & uncles, and his brother Bob (Lisa) Covol of Sandusky, OH, and sister Terri (Gary) Astorino of Edinboro, PA. In addition, nieces and nephews who adored their uncle, Drew (Jordyn) Astorino, Lauren (Evan) Mazary, Matthew Astorino, Rachel, Danny, & Luke Covol. Jeﬀ found such joy and peace as a lifelong ﬁsherman. He was fondly referred to as “The Captain” by many for his great passion & skill as an avid angler. His heaven on earth was on the shores of Lake Erie doing what he loved most. We know with each sunrise over the lake, Jeﬀ’s spirit will be felt ﬁshing on those waters. Jeﬀ was a hard worker spending his entire career in the food sales industry, the last several years with Triangle Sales & Marketing as an Account Manager. Jeﬀ enjoyed spending time with family, golﬁng, and vacationing at Hilton Head. For those lucky enough to have known Jeﬀ, his quirky sense of humor and wit will be greatly missed. No funeral services will be held. Jeﬀ’s wishes were to spend eternity at the place he loved, so his ashes will be spread over Lake Erie at a later date. Donations in Jeﬀ’s memory can be made to the National Coalition for Homeless Veterans www.nchv.org OR to NATURALHigh.org.

The family of Jeffrey L. Covol created this Life Tributes page to make it easy to share your memories.

Jeﬀrey Lynn Covol, of Plum Borough, passed away peacefully on...