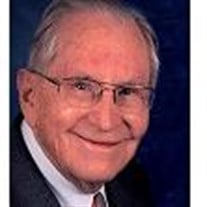 James C. Cunningham Age 96, of Penn Hills, passed away on Wednesday, December 26, 2018. He was born on March 14, 1922 in Pittsburgh to the late Clarence and Mary (Ingoldsby) Cunningham. He was the beloved husband of the late Ruth E. Cunningham for 67 years. Loving father of William James Cunningham (Katy); grandpa of Dominic and Michael; and also survived by special nephews and nieces, Robert Page (Shirley), Clint Page (Paulette), James Kelly (Barb), Dorothy Gruseck, Debbie Weigold (Howard), Sandra Kulig (Stan) and Pam Fratangelo (Mario), who gave much love and care throughout Jim’s life along with many other relatives and friends. Jim was preceded in death by his sisters, Jeannie Page (the late Clint) and Dorothy Kelly (the late Joe); nieces, Patricia Burkey (the late Bill) and Terri Meilinger; and his nephew Austin Page (the late Betty). He was an amazing husband, father and grandfather. Jim loved and was loved by so many. He was a truly great person that helped and influenced everyone he met. He was a 1st Lieutenant in the Army Air Corps, 490th Bombardment Group, Eighth Air Force stationed in England during WWII. As a B-17 co-pilot he participated in 35 heavy bombing missions over Europe. He was awarded the Distinguished Flying Cross and the Air Medal with 4 Oak Leaf Clusters for his skill and courage. Jim retired from Allen Gauge and Tool, where he had been a general manager. He was a member of the Frick Park Lawn Bowling Club, Dickens Fellowship and a long-time member and usher of St. Bartholomew Church. Jim had also delivered meals-on-wheels, recorded books for the blind and was a former Cub Master of Pack 115. Family and friends will be received from 11 a.m. until 3 p.m. on Sunday, December 30 at the GENE H. CORL INC. FUNERAL CHAPEL AND CREMATION SERVICES OF MONROEVILLE, 4335 Northern Pike (412-372-2100). Mass of Christian Burial at 10 a.m. on Monday, December 31, 2018 at St Bartholomew Church in Penn Hills. Interment will be private. Memorial contributions can be sent to New Horizon School PTO, 128 Friendship Circle, Beaver, PA. 15009, the school his grandson Dominic attends for special needs children. For more information, please visit www.corlfuneralchapel.com

James C. Cunningham Age 96, of Penn Hills, passed away on Wednesday, December 26, 2018. He was born on March 14, 1922 in Pittsburgh to the late Clarence and Mary (Ingoldsby) Cunningham. He was the beloved husband of the late Ruth E. Cunningham... View Obituary & Service Information

The family of James C. Cunningham created this Life Tributes page to make it easy to share your memories.