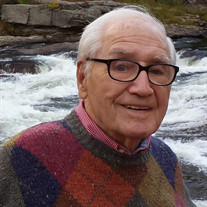 James Francis Butler, age 103 (2 weeks short, but we’re giving it to him anyway!), of Monroeville, PA peacefully passed away on November 9, 2020 surrounded by loved ones. True to character, he did it his way, all the way to the end! He was born on November 23, 1917 to the late Edward Butler and Catherine Martin Butler and sadly followed by his brother Edward Butler, Jim Verner (nephew), and sister Anne Cassidy (Butler). Jim was raised in Oakland, and attended St. Paul Cathedral School, Central Catholic, and the University of Pittsburgh. He was employed by Carnegie Steel, now U.S. Steel, in the chemical research division. Jim served his country as a sergeant and gunnery instructor in the U.S. Army 1st Armored Division during World War II, in Italy and North Africa. He was a devout Catholic who attended St. Paul Cathedral for 60+ years, serving as an usher and a member of the organ committee. North American Martyrs has been the home parish for his family for the past 38 years. He was very proud of his Irish background and active in the Gaelic Arts Society, where he served as both President and Vice President. He was also on the Irish room committee for the University of Pittsburgh Nationality Rooms. He had a passion for gardening, music, and photography and regularly supported cultural institutions in the Pittsburgh area. Jim leaves behind his wife Patricia Butler, daughter Laura Butler, grandson Justin Uplinger, nephew Tom Verner (Janet Fredericks), and niece Patricia Miller. Friends will be received on Thursday from 2 to 6 p.m. at the GENE H. CORL FUNERAL CHAPEL INC. AND CREMATION SERVICES OF MONROEVILLE, 4335 Northern Pike (412-372-2100). Due to current CDC recommendations, the wearing of facial masks and social distancing will be followed. A Mass of Christian Burial will be held at 10 a.m. on Friday November 13, 2020 at Christ the Divine Shepherd Parish at North American Martyrs Church. Entombment following in Good Shepherd Cemetery with military honors. www.corlfuneralchapel.com.

James Francis Butler, age 103 (2 weeks short, but we&#8217;re giving it to him anyway!), of Monroeville, PA peacefully passed away on November 9, 2020 surrounded by loved ones. True to character, he did it his way, all the way to the end!... View Obituary & Service Information

The family of James Francis Butler created this Life Tributes page to make it easy to share your memories.