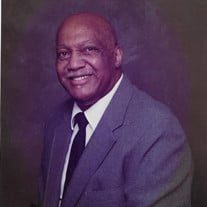 Isaac Reginald Sims, 93, of New Kensington, PA. died Monday, February 8, 2021 at Concordia of Monroeville from COVID-19. Born July 26, 1927 in Jefferson City, AL, he was the son of the late Earl Sims and Corene Waddell White. Mr. Sims was drafted at the age of 18 to the U.S. Army. He served 2 years in the Army and arrived home enlisted with the U.S. Navy where he proudly served 20 years from 1947-1966. After leaving the military he met and married his beloved wife, Edith, in April of 1967 in New York City. The two of them moved to Wilkinsburg and ran Sims Photography and Studio for many years. They made the decision to close the studio and retire to Beckley, WV where they spent many years with the family and friends. They joined and are still current members of the Beckley Seventh Day Adventist Church. In 2017, their children encouraged them to move back to New Kensington. They lived in New Kensington until 2019 when they moved into Concordia of Monroeville Personal Care facility. Mr. Sims is survived by his wife, Edith Mae (Griffin) Sims of 53 years of marriage. He has 2 sons, Reginald Sims of New Kensington and Michael (Trish Long) of Penn Hills. He has one brother, Babafunka Ajama of Jacksonville, FL. and 2 sisters Ernestine Lee of Pittsburgh and Alice Randall of Jacksonville, FL; many grandchildren, great-grandchildren, nieces and nephews. He was preceded in death by his grandparents, Isaac and Lola Hunter Walton and his beloved mother, Corene Waddell White and a daughter, Suzanne Sims of Wilkinsburg. All services will be private at Mrs. Sims request. All cards and contributions can be sent to Mrs. Edith Sims, c/o Concordia of Monroeville, 4363 Northern Pike, Monroeville, PA. 15146. Arrangements entrusted to the GENE H. CORL FUNERAL CHAPEL INC. AND CREMATION SERVICES OF MONROEVILLE. www.corlfuneralchapel.com.

The family of Isaac R. Sims created this Life Tributes page to make it easy to share your memories.