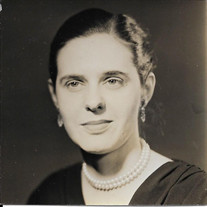 Genevieve Madeleine Titus of Monroeville, PA, formerly of Braintree and Jamaica Plains, passed away peacefully on January 13, 2021, at the age of 98. She was born June 7, 1922, in Jamaica Plains, Massachusetts, the daughter of Henri and Renee Girard, and lived in Jamaica Plains until her marriage in 1953. Genevieve was a serious student of ballet from early childhood through high school, and performed at numerous venues in Boston. The daughter of a classical musician, she learned to play piano at an early age, and enjoyed playing her entire life. Her father, a base violinist for the Boston Symphony Orchestra, instilled in her a love and appreciation of classical music. She was a lifelong attendee of concerts at Symphony Hall in Boston. Growing up she spent summers in Lake Placid, NY, where her father and other BSO musicians played at the Lake Placid Club, a social and recreational club. She held wonderful memories of those years, attending the youth concerts each Saturday at the Lake Placid Club, and hiking and picnicking in the Adirondacks’ with family and friends. In the late 1930’s the Boston Symphony Orchestra began a yearly summer music festival at Tanglewood in the Berkshire Hills of Western Massachusetts. Thereafter, she spent part of each summer enjoying the BSO concerts at Tanglewood and the natural beauty of Western Massachusetts. Genevieve graduated from Jamaica Plains High School in 1940 at the top of her class, served as the class Vice President and was voted Most Popular. The caption beneath her class picture fittingly reads, “Dance and be merry but be also innocent”. Following graduation, she attended the Stenotype Institute of Boston, then worked as a secretary at the Boston Army Base from 1941 to 1953, becoming the secretary to the base commander. Here she met her future husband, Captain Peter Titus, a base physician. They were married in February of 1953. Following the premature death of her husband in 1956, Genevieve moved to Braintree with her two young children, to be near her sister. Initially she worked as a transcriber for Leavitt Reporting, a small court reporting company in Weymouth. From 1965 to 1991 she served as the secretary to four superintendents in the Braintree Public School System. For many years she was an active member of Emmanuel Episcopal Church in Braintree and later of the Holy Nativity Episcopal Church in Weymouth. Genevieve surrounded herself with a large group of loyal friends. Many were single mothers like herself. They met regularly, playing card and board games, visiting museums, attending concerts and taking day trips throughout New England. She spoke fluent French, her parent were natives of France, and over the course of her life traveled to France numerous times visiting relatives and enjoying French culture, art and history. Genevieve loved singing. For over two decades she sang soprano in the Braintree Choral Society, and also served as its secretary. She participated in dance groups well into her 80’s and in retirement she volunteered at the Massachusetts Respiratory Hospital in the Braintree Highlands. In 2009 Genevieve’s health began to decline and she moved to Monroeville, PA to be close to family. The closing years of her life were spent under nursing home care. In August off 2020, she and her roommate and friend of four years, Mary Randall, simultaneously came down with Covid virus. Mary did not survive. Though Genevieve survived, she never fully recovered from its effects, and passed away five months later. Genevieve appreciated the blessings of her life and faced life with optimism. She was a dedicated and loving daughter, mother, wife, and grandmother and great grandmother, a woman of dignity, integrity and moderation, a hard worker who sought excellence in her undertakings, and one who treated people as she would want to be treated. She was highly regarded by those who knew her. She is missed. Genevieve was preceded in death by her husband, Peter F Titus, her parents, Henri and Renee Girard, a sister Renee Young and her husband Roland, a nephew Claude Young, sisters in law Louise Titus and Isabelle Titus, and grandchildren Rachel Marie Childers and Isaac James Childers. She is survived by a daughter, Mary L. Childers of Tulsa, Oklahoma and late husband Jeff, a son Peter F Titus and his wife Ann E Titus of Monroeville, PA, nine grandchildren, three great grandchildren and nephews, Mark Young of Weymouth, MA, and Mark Titus and his wife Bobbi of Baltimore, Md A memorial service will be held in Braintree at a later date.

Genevieve Madeleine Titus of Monroeville, PA, formerly of Braintree and Jamaica Plains, passed away peacefully on January 13, 2021, at the age of 98. She was born June 7, 1922, in Jamaica Plains, Massachusetts, the daughter of Henri and Renee... View Obituary & Service Information

The family of Genevieve M. Titus created this Life Tributes page to make it easy to share your memories.