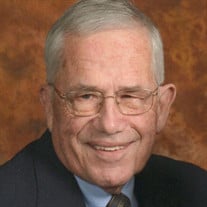 Frederick Joseph Schirm Jr., of Monroeville, passed away suddenly on Sunday, October 25, 2020. He was born November 4, 1939 in Hoboken, NJ to the late Frederick and Annelise Schirm. Fred and his family moved to Monroeville when he was in his teens. He was a graduate of Turtle Creek High School, and then Carnegie Tech with a bachelor's degree in Chemical Engineering. After graduation, Fred served as a first lieutenant in the Army Corp of Engineers. After two years of active duty, Fred was hired by Factory Mutual Engineering, now known as FM Global, where he finished his career. During his professional career, Fred obtained his license as a professional engineer. In his spare time, he doubled as a soccer coach for both of his sons’ soccer teams plus he was a soccer umpire for the Monroeville Soccer Club. Fred was also past President of the Board of Trustees at Cross Roads Presbyterian Church. After retirement, Fred became an active volunteer, supporting Cross Roads Presbyterian Church and their local food pantry. He also served as an adult leader for numerous mission trips with the youth ministry at the church. Fred also volunteered for 15 years as an AARP Foundation tax-aide, plus instructor via the Monroeville Community Senior Center. Fred was an avid golfer, and loved to travel having visited 36 different countries and all 50 states. His greatest joy was attending his granddaughters’ activities and being with family and friends. Survivors include his loving wife Diane (Starrett) of 54 years, his two sons Gregory A, of Trafford, and Jeffrey J. (Monica) of Monroeville. Also surviving are his two granddaughters Mia Annelise and Julia Marie. There will be no visitation. A celebration of life ceremony will be scheduled at a future time. In lieu of flowers, memorial donations may be made in his name to: Greater Pittsburgh Food Bank, 1 N. Linden Street, Duquesne, PA 15110 or Cross Roads Food Pantry, 2310 Haymaker Road, Monroeville, PA 15146. https://www.pittsburghfoodbank.org/ways-to-give/ http://crossroadspresbyterian.com/give-to-cross-roads.html

Frederick Joseph Schirm Jr., of Monroeville, passed away suddenly on Sunday, October 25, 2020. He was born November 4, 1939 in Hoboken, NJ to the late Frederick and Annelise Schirm. Fred and his family moved to Monroeville when he was in his... View Obituary & Service Information

The family of Frederick Joseph Schirm Jr created this Life Tributes page to make it easy to share your memories.