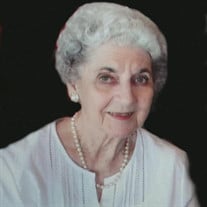 EUGENIA (FRISCH) ANTICICH Completed her earthly journey on February 5, 2021, at age 94 and just two days before her 68th wedding anniversary, passing into the hands of her heavenly Father. As she always said, “Be careful going home.” She spent her first 79 years in New Orleans, LA, where she was born. A trip to visit her son and daughter-in-law in Murrysville, PA, was planned for September 2005 but was fortuitously rescheduled to mid-August, sparing her and her husband Louis the Hurricane Katrina disaster. They were due to return home the day New Orleans flooded, leading to three months living with her family. Afterwards, she and Louis moved from New Orleans to escape future hurricanes and be closer to her family, residing at Walnut Crossings in Monroeville, PA. In 2018, they moved to Independent Living at Redstone Highlands in Murrysville, PA. She was a devout Catholic who embraced her faith. She enjoyed gardening and cooking and loved being a mother and homemaker. She was tenacious in her long struggle to remain mobile, a miraculous accomplishment that she managed to maintain until the last weeks of her life. She is survived by her husband Louis, son Leslie, and daughter-in-law Janet of Murrysville, PA, her grandson Scot (Holly) Wallace of Pittsburgh, and her sister-in-law Barbara Frisch of Fort Wayne, IN, and many nieces and nephews. She was the daughter of the late Eugene and Stella Frisch. She was pre-deceased by her sister Rita (Bayne) Luke and her brother Eugene Frisch. A Blessing Service will be held for family only at the GENE H. CORL FUNERAL CHAPEL INC. AND CREMATION SERVICES OF MONROEVILLE. Burial will be at Good Shepherd Catholic Cemetery in Monroeville. Online obituary available at www.corlfuneralchapel.com.

EUGENIA (FRISCH) ANTICICH Completed her earthly journey on February 5, 2021, at age 94 and just two days before her 68th wedding anniversary, passing into the hands of her heavenly Father. As she always said, &#8220;Be careful going home.&#8221;... View Obituary & Service Information

The family of Eugenia F. Anticich created this Life Tributes page to make it easy to share your memories.