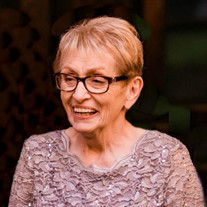 Donna Marie (Flamm) Clemente died peacefully on Sunday, September 27, 2020. She was born in Pittsburgh on October 22, 1942 and lived her entire life in the area, first in East Liberty where she helped her mother raise her two brothers and where she met the love of her life, Dominic Clemente. The two were married in 1959 and began their family. Dom was in the Army so they lived briefly in Oklahoma before returning to Pittsburgh to settle in Penn Hills. As their family grew, they moved to Monroeville where they created an extended family with their neighbors on Berkshire Drive. Donna worked tirelessly her whole life to raise their six children and make a warm and loving home. She will always be remembered for her love and support of her family. Recently Donna moved to Harbor Senior Living in Monroeville where she enjoyed time with the other residents playing bingo, crafting, and taking field trips. She was known as "the Hugger" by residents and staff there who became her friends. Donna was preceded in death by her husband Dominic, her mother Catherine (Futino) Flamm, son Dominic Clemente, Jr., daughter Karen Clemente Uhrmacher, son-in-law Pasquale Dicesere, and brother Robert Flamm. Donna will be missed by all who knew her, and especially by her family. She is survived by four children, Maria Dicesere, Anthony Clemente, Kathy Evason (Steve Reis) and Mark Clemente (Amanda); eleven grandchildren, Andrew Uhrmacher, Danielle Dicesere Klein (John), Aaren Uhrmacher Haupt (Scott), Jordan Spokane (Sophia), Deanna Dicesere, Katherine Clemente, Madalyn Evason, MJ Clemente, Jack Clemente, Michael Clemente and Leo Clemente, and four great grandchildren, Isabella, Colton and Harper Haupt and Parker Klein. She is also survived by her brother Joseph Flamm (Chris), brother-in-law Fred Clemente, and many nieces, nephews and close friends. A private visitation and blessing service will be held for the family. Donna's family is grateful for the wonderful staff and the excellent care she received both at Harbor Senior Living and at Family Hospice Center in Lawrenceville. In lieu of flowers memorial contributions may be made to the American Diabetes Association, Two Chatham Center #1520,112 Washington Place, Pittsburgh, Pennsylvania 15219 or [email protected] Arrangements entrusted to the GENE H. CORL FUNERAL CHAPEL AND CREMATION SERVICES OF MONROEVILLE.

Donna Marie (Flamm) Clemente died peacefully on Sunday, September 27, 2020. She was born in Pittsburgh on October 22, 1942 and lived her entire life in the area, first in East Liberty where she helped her mother raise her two brothers and where... View Obituary & Service Information

The family of Donna M. Clemente created this Life Tributes page to make it easy to share your memories.