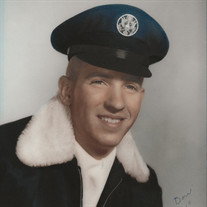 Donald E. Wallhausen, 84, of Greensburg, PA, entered eternity on March 15, 2021. Don born on January 19, 1937, to Harold and Martha (Lemke) Wallhausen of Detroit, MI, was baptized and confirmed at Our Savior Lutheran Church, graduating from Denby High School in 1956. He served from 1961 to 1967 in the US Air Force, with some time stationed in Alaska with the 40/80th Strategic Reconnaissance Wing Light responsible for housing the famed U-2 aircraft. Upon discharge Donald attended the wedding of a friend in California, and from there decided to make California his home working until retirement for the Southern California Gas Company. In 1977 he met and married Darlene Aubertin-French. He was a camp counsellor for his church, the Assembly of God, and opened his home to many youth over the years, a ministry he spoke of fondly. After the passing of his wife Darlene in 1995, Donald remained in Ventura, CA until 2009 when he moved to Greensburg, Pennsylvania to be with his brother Kenneth and family. Don had a deep and abiding faith and was an active member of the Calvary Assembly of God in Irwin, PA. He loved motorcycle racing and maintenance, often volunteering for pit crews. He participated in a motorcycle ministry, combining his love of machines and devotion to God. He collected, repaired, and maintained mechanical antiques. Preceded in death by his wife Darlene and brother Kenneth H. Wallhausen, Don is survived by step-children, nieces, a nephew, great-nieces and nephews, and many other dear family members and friends. The family will hold a private memorial service. Donald’s wishes were that rather than flowers he would prefer all gifts be given to the ministries of Concordia Lutheran of Cabot, PA and Motor Racing Outreach @ www.go2mro.com. Arrangements entrusted to the GENE H. CORL FUNERAL CHAPEL INC. AND CREMATION SERVICES OF MONROEVILLE. Please visit www.corlfuneralchapel to leave condolences.

The family of Donald E. Wallhausen created this Life Tributes page to make it easy to share your memories.