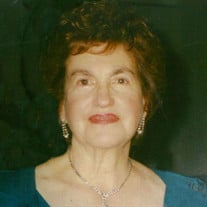 Dolores Martinelli Age 85, of Penn Township, formerly of Penn Hills and Wilmerding, passed away on Thursday, May 26, 2016. Loving mother of Rosemary Martinelli (Gary J. Budd), Lisa Anne Martinelli (David J. Patosky), and Anita Martinelli-Land (Michael D. Land, Jr.); grandmother of Jake Edward Pollock, who was her pride and joy; sister of Lawrence J. Oliver. She is also survived by nieces and nephews throughout Pittsburgh and Maryland. Dolores was preceded in death by her parents, Joseph and Mary (Zappi) Oliver, her former husband, James A. Martinelli, and her siblings: Connie Duva Falvo Walker, Helen M. Bionta, Thelma V. Fischione, Patsy “Pat” V. Oliver, and Norma M. Tamburri. Dolores was a conscientious woman who worked for many years at several companies. She worked for Westinghouse Airbrake and Assurance Glass and Mirror as an administrative assistant, at Gimbels in downtown Pittsburgh, and in the bakery at Foodland. After she was helped by a PA state representative, she decided to give back to her local community by working at every primary and general election for more than a decade. Dolores loved the arts and musical theatre, and taught her daughters to love them, too. She played the piano and flute and enjoyed listening to her brothers, Pat and Larry, and their “big band” orchestra. She sang in the church choir and was a cantor at St. Bartholomew Roman Catholic Church in Penn Hills. Dolores loved celebrating holidays with her family and friends, baking cookies and pizzelles, and babysitting her grandson, Jake. She was a terrific ballroom dancer, and also enjoyed getting together with the “golden girls” in the choir. An avid Pittsburgh Pirates, Steelers, and Penguins fan, she could cite sports statistics and player records with precise accuracy. Friends will be received from 2-4 & 6-9 p.m. Sunday, May 29, 2016 at the GENE H. CORL INC. FUNERAL CHAPEL AND CREMATION SERVICES OF MONROEVILLE, 4335 Northern Pike (412-372-2100). No visitation Monday. Mass of Christian Burial at 10 a.m. on Tuesday, May 31, 2016 at Mother of Sorrows Roman Catholic Church, 4202 Old William Penn Hwy, Murrysville. Entombment following in New St. Joseph’s Cemetery, on Route 30 in North Versailles. In lieu of flowers, memorial contributions can be made to the: American Diabetes Association, 2 Chatham Center, Suite 1520, 112 Washington Place, Pittsburgh, PA. 15219; or Autism Speaks, 8035 McKnight Road, # 302, Pittsburgh, PA. 15237; or the American Cancer Society, 320 Bilmar Drive, Pittsburgh, PA. 15205. For more information, please visit our website, www.corlfuneralchapel.com

The family of Dolores Martinelli created this Life Tributes page to make it easy to share your memories.