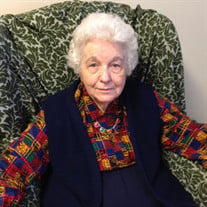 Delores Steele, 93, formerly of Wilkins Township, passed away peacefully on September 14, 2020 at Homeland Center in Harrisburg, PA. Delores was born on August 18, 1927 in Liberty Boro. She was the daughter of the late William H. and Mary L. Dougherty and the sister of Virginia Dougherty Mansell and William H. Dougherty, Jr. both of whom predeceased her. Delores was an honors graduate of the 1945 class of McKeesport High School and a 1948 graduate of the Presbyterian Hospital School of Nursing. She deeply enjoyed her nursing career and especially her employment at Magee-Women’s Hospital. She worked there for over 25 years on the medical/surgical, intensive care and emergency care units. Delores and her husband James Steele were married for 62 years prior to his death in 2011. She is survived by her beloved son, James T. Steele, Jr. of Harrisburg. Other survivors include her nieces Laurie Reich in Kittanning, Debbie Woodruff and Kathy Hodges , both in Charlotte, N.C., Margaret Shafer and Carol Steele , both in Pittsburgh and nephews David Dougherty, in Charlotte, Douglas Steele in Charlotte and Donald Steele, in Summit NJ, as well as numerous great-nieces and great-nephews. Visitation and services will be private for the family. To honor her lifelong commitment to the nursing profession, memorial gifts may be made to the Professional Nurses of Southwestern PA Scholarship Fund of the Pittsburgh Foundation via credit card or donations by check which can be mailed to The Pittsburgh Foundation, 3 PPG Place, Suite 250, Pittsburgh, PA 15222. Checks should be made payable to The Pittsburgh Foundation, include the name of the fund in the memo line and note that it is being made in memory of Delores Steele. Arrangements entrusted to the GENE H. CORL FUNERAL CHAPEL INC. AND CREMATION SERVICES OF MONROEVILLE.

Delores Steele, 93, formerly of Wilkins Township, passed away peacefully on September 14, 2020 at Homeland Center in Harrisburg, PA. Delores was born on August 18, 1927 in Liberty Boro. She was the daughter of the late William H. and Mary L.... View Obituary & Service Information

The family of Delores M. Steele created this Life Tributes page to make it easy to share your memories.