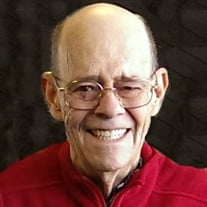 David “Dave” Williams , Sr., 77 of Monroeville died peacefully on Friday, December 13, 2019. He was born Nov. 11, 1942 in Chicago to Richard and Isabell Williams. After serving as an officer in the Army in Vietnam, he worked as a metallurgical engineer at U.S. Steel for 40 years. He married the love of his life, Joyce on December 19, 1964. He was a proud Chapter President and Senator in the Indiana Jaycees and was very involved in The Girl Scouts and Boy Scouts for almost 20 years. He was a former Deacon at Cross Roads Presbyterian Church. He is preceded in death by his parents and a brother James (Sue) Williams. He is survived by his loving wife Joyce, son David Jr, daughter Elizabeth (Frank) Brown, daughter Susan (Katrina Fauss) Williams, son Christopher (Tina Stroschein) Williams and daughter Sarah (George Beers) Williams, 3 grandchildren, Madelyn, Alyson and Evan; brother Lee (Martha) Williams of Phoenix; and 3 nieces and 2 nephews. Dave had a passion for trains, history, the Chicago Cubs and building wooden models. His happiest days were spent camping with his wife and spending time with his family baking cookies and celebrating the holidays. He was a very loving man who cared deeply about people and the less fortunate. To honor his giving nature, the family asks, in lieu of flowers, that donations be made to DonateLife.org or the Wounded Warrior Project. Friends will be received Tuesday, December 17th from 4 to 8 P.M. at the GENE H. CORL INC. FUNERAL CHAPEL AND CREMATION SERVICES OF MONROEVILLE, 4335 Northern Pike (412-372-2100), and where a service will be held on Wednesday, December 18, 2019 at 11:00 a.m. Interment following in Plum Creek Cemetery. www.corlfuneralchapel.com

The family of David Williams Sr. created this Life Tributes page to make it easy to share your memories.