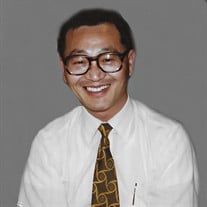 Dr. Cheng Dong Young, age 84, of Monroeville passed away on Wednesday, February 10, 2021. Beloved husband of Susan Pai Shan (Lei) Young; father of Dr. James Young (Daisy). Dr. Young was born in Shijia Zhuang, China on April 19, 1938. He fled to Taiwan in 1949 along with his parents where he finished high school and attended medical school. He graduated from the National Defense Medical School and served 10 years at the Taiwan Armed Forces General Hospital. Later Dr. Young was promoted to an attending Hematology physician in Taipei Veterans General Hospital. He was loved and trusted not only by his patients, but by his directors and colleagues, and was honored with the President Physician’s award during this time. In 1975, Dr. Young decided to decline the Chief Physician position in the hematology department and decided to move his whole family to the United States. He started his 2-year internship in Yonkers Hospital in New York and achieved his medical license. In 1977, by the leading of God, Dr. Young was hired as a physician by Braddock Hospital. He was also on staff at Forbes Hospital and many nursing homes and had a private practice with Dr. Ou for 28 years. He also worked along with Dr. Ho, Dr. Tong and Dr. Ragoor. He was a dedicated physician who was trusted and loved by his patients. Dr. Young was involved in many community activities including the Chinese community where he once served as chairman of the OCA (the Organization of Chinese Americans), and Chinese associations overseas. In 2005, Dr. Young was forced to retire from his practice due to Parkinson’s disease. For the first few years he still enjoyed swimming and singing with the Monroeville Senior Citizens Choir. He liked to use music to help and comfort others in need. By God’s amazing grace, his doctors, his healthcare workers, family members and friends, Dr. Young was able to endure the effects of Parkinson’s the last 16 years. By 2013, he became homebound and was able to spend precious time at home with family and friends. On February 10th, right before the Chinese New Year, Dr. Young went with our dear Lord peacefully, where there is no more tears, pain and suffering. He went before us until we meet again and made a wonderful testimony to our Lord. He accomplished his worldly duties as a dedicated and devoted physician, husband and father. He will be missed by all those who knew and loved him. Thanks to our heavenly Father that we have this abundant life. All glory and grace belong to God. Amen. The family would like to thank his doctors and healthcare workers for their wonderful care and to their many friends for their love and support. Friends will be received from 1-6 p.m. on Saturday, February 20th and from 1-6 p.m. on Sunday, February 21st at the GENE H. CORL FUNERAL CHAPEL INC. AND CREMATION SERVICES OF MONROEVILLE, 4335 Northern Pike (412-372-2100), and where a funeral service will be held on Sunday at 3 p.m. The wearing of facial masks and social distancing will be followed per CDC guidelines. A private entombment will be at Homewood Cemetery. To leave a condolence please visit www.corlfuneralchapel.com.

The family of Dr. Cheng Dong Young created this Life Tributes page to make it easy to share your memories.