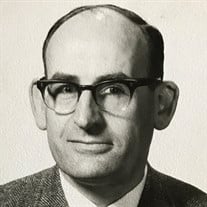 Cecil John Mole of Longwood at Oakmont passed away on June 21st, 2017 after a brief illness. He was born near London on October 11, 1925 to Beatrice Noble Mole and Stanley Hector Mole. Both parents had a role in WWI, Beatrice joined many women working at the Royal Arsenal, and Stanley served in the military before resuming his career with the Metropolitan Police. John was one of 8 siblings. John attended and graduated from Eltham Central School, paying his own expenses with a wage of 6 pence per hour from Skillman’s Grocery. He then served in the Royal Air force during WWII after enlisting at age 17. He was trained as a navigator. After WWII John attended South East London Technical College. In 1950 he earned a degree in Electrical Engineering and became an engineer at English Electric. He met Phyllis Ann Mitchell in San Remo Italy and had lunch with her in Monte Carlo the next day, they would see each other in New York and England until he married Phyllis on August 28, 1959. They lived in Southport, England until 1960 when they immigrated to the US. John became an electrical engineer with Westinghouse Electric where he worked until his retirement in 1990. His responsibilities increased until he became the Director of the Engineering Research Division. This included Electromagnetic, Mechanical, Aerodynamics, Hydrodynamics and several other departments. His work included electric gun technology, ship and submarine propulsion systems, superconducting particle accelerator magnets and control software for robots. John has 8 patents. After mandatory retirement in 1990, John worked as a volunteer for the service corps of retired executives until he was 80 helping over 250 small business owners. During retirement he and Phyllis traveled extensively by expedition ships to British Columbia, Alaska and the Columbia and Snake rivers. They also circumnavigated the British Isles and visited Greenland and Baffin Island. They took a three week tour of Russia and the Baltic states shortly after the Eastern Bloc gained independence. John’s mind never wanted to rest, and over the last few years he became very interested in his family history. His father descended from the Huguenots of France, and his family came to Mersea Island, England to work in the oyster business. Mersea oysters now are sold by a family member in London’s Borough Market. He is survived by his loving sons, Stephen John Mole and Thomas Lathrop Mole, both of Pittsburgh; and his loving grandchildren, John Thomas, Eric James and Carolyn Elizabeth Mole. He is the brother of Edna, Cyril, Norman, Gordon, Nancy, Olive, Jeanne. Friends will be received Thursday, June, 29, 2017 from 6-8 p.m. at the GENE H. CORL INC. FUNERAL CHAPEL AND CREMATION SERVICES OF MONROEVILLE, 4335 Northern Pike (412-372-2100). A private service will be held on Friday. The Family respectfully requests that in Lieu of Flowers, Donations be made to The Mersea Island Museum, England (https://www.merseamuseum.org.uk/mmcontact.php) or the Children’s Museum of Pittsburgh. (https://pittsburghkids.org/support)

Cecil John Mole of Longwood at Oakmont passed away on June 21st, 2017 after a brief illness. He was born near London on October 11, 1925 to Beatrice Noble Mole and Stanley Hector Mole. Both parents had a role in WWI, Beatrice joined many women... View Obituary & Service Information

The family of Cecil John Mole created this Life Tributes page to make it easy to share your memories.

Cecil John Mole of Longwood at Oakmont passed away on June 21st,...