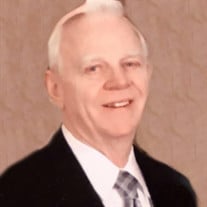 Today, Heaven is a better place. Just before midnight on February 22, 2020, at Forbes Regional Hospital Cecil “Skeets” Garnet Sipe Jr., passed peacefully, surrounded by his devoted children. Born, June 19, 1930, he is survived by his loving wife of 57 years, Nancy Lacko Sipe and his children: Wesley Jay Sipe (Denise), Amy Fay Poppa (Thomas) and Wendy Kay Plank (Thomas) as well as his cherished grandchildren, Garrett & Martin Sipe, and Olivia & Sarah Plank. Originally of Johnstown PA, he is preceded in death by his parents, Cecil G. Sipe Sr. & Rose Cugini and his sister Marlene DiMarco. Skeets’s early days were spent at Sipe’s Service Station, where he nurtured his love for automobiles and mechanics. Professionally, Skeets was a med-tech in the U.S. Army and served, during peace time, at Walter Reed Army Medical Center. He received his undergraduate degree from the University of Pittsburgh and earned his Master’s Degree at Temple University, in Philadelphia. Before his children were born, he was an enthusiastic private pilot. His career highlights include the clinical laboratory manager position at Stanford University Medical Center, from which he was recruited to design, build and manage the clinical laboratories of the Forbes Health System, Monroeville & Pittsburgh, PA. Skeets adored his family above all else. During his retirement he enjoyed spending time with them, tinkering in his garage, visiting with friends and working out at the Monroeville Senior Center. Visitation will be on Tuesday, February 25th from 4 to 8 p.m. at the GENE H. CORL INC. FUNERAL CHAPEL AND CREMATION SERVICES OF MONROEVILLE, 4335 Northern Pike (412-372-2100), and where a Funeral Service will be held on Wednesday, February 26, 2020 at 10:30 a.m. Burial following in Jefferson Memorial Park, West Mifflin. In lieu of flowers, memorial donations can be made in his memory to the American Cancer Society, 320 Bilmar Drive, Pittsburgh, PA. 15205 or www.cancer.org.

The family of Cecil G. "Skeets" Sipe Jr. created this Life Tributes page to make it easy to share your memories.

Today, Heaven is a better place. Just before midnight on February...